I got this chromatic dulcimer kit because I wanted to learn the mountain dulcimer, but being from a more classical music background I liked the idea of the flexibility of the chromatic over the traditional fretting. However, a nice chromatic instrument is not cheap to come by (not many used ones)

I did work with the Folkcraft team, and I paid the installation fee for my frets because I wanted that done right.
I read the instructions provided, but having the video series on Youtube was a huge help in understanding everything.
I also wanted to put some form of finish to my fretboard and the cardboard itself - and again Richard was great in giving guidance on that. I actually went with an instrument lacquer on the cardboard and tung oil on the fretboard.

I did do some additional work on mine that is not a part of the kit:
I worked out a way that I would be able to have strap buttons installed, to be able to use a strap because I'm clumsy.
I was also able to find online guidance for how to do the position marker inlays and added those also (acrylic 2mm).
The final thing I did was added some art to the strum hollow, just for fun as I had a wood burner and extra position markers. This was mostly for fun.

In the end, I love it!!! It's something I made and now I get to learn to play.
The only issue is that I have a bit of a rattle, mostly in my middle string. Right now it's not bothering me too much - but I hope to look at it more soon.

C
Cynthia Rossi
not built yet!

I will update the review once I see the kit and help my granddaughter put it together. I got it for her last month as a birthday gift. With some luck, I'll include a photo. As always, Folkcraft is one of my go-to dulcimer builders.

took my time in the build over three days. print & pictures could be larger. or the toner/ink replaced in your printer. easy to follow overall. now getting used to having all the notes…

My friend was thrilled with the gift--just not the condition in which it arrived! The carrier demolished the package, but after being contacted about the problem, you promptly shipped another kit via another carrier. Thank you so VERY much for being so kind and prompt about sending the replacement. I have truly sung your praises to my friend and have encouraged her to sign up for your newsletter and to check out the books, etc. that you have available.

L
Lynda
My second one!

This was so much fun that I made another one for a friend. Now that I have one under my belt, the second one was even prettier! The sound is really awesome for a cardboard instrument. I cannot say enough good about this kit and all the dulcimers from Folkcraft. Love them all! 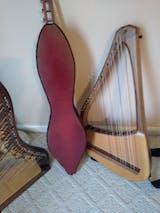