Sooo, a couple years ago,, My dad said he wanted to build a "dulcimer" to sit next to his jaw dropping Stewmac guitar. I had no clue what a dulcimer was, but I looked it up and liked the folk feel to dulcimers. Long story short, I picked up an Apple creek hourglass online and, with great excitement, I learned Amazing Grace in an afternoon.
.....I WAS HOOKED! I love(d) the fact that dulcimer doesn't require a lot of time or skill to learn like guitar. A few months later, I was given a handmade dulcimer from Dad's shop for Christmas. The hourglass dulcimer I ended up with was initially a walnut hourglass, but he changed it to Spanish cedar on the top and bottom. He also did mahogany binding to make it pop a little bit more. The kit didn't have any sort of binding. After learning to play a couple years ago, I can easily play a handful of
hymns and, of course Dixie, cause every dulcimer player should know a few tunes from the 1850's. After the inspiration from the Folkcraft Hourglass (as custom as it was), he has since built five or six custom dulcimers, and I just completed my first scratch built teardrop two weeks ago. It was a very fulfilling project that tested my abilities. This year, I've picked up a walnut hourglass kit for my 12 yr old son to build with his grandfather. I highly recommend going with folkcraft dulcimers. Also, the hourglass and teardrops have distinctly different sounds it's a good idea to try one of each at a music store before making your choice and purchasing. 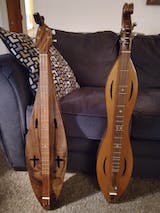 Ordered walnut dulcimer kit with changes Butternut top with heart vines cut in top the extra changes were worth the extra cost .Fast delivery two days quality was top of the line .Turned out as a great looking and sounding Dulcimer thank you Richard I will shop again Joe

The wood, hardware and shipping were very good. I thought the instructions were disorganized and confusing. I added some extra frets and abalone dots. The sound is pretty good with such a small box. Five stars from me!

I have worked with my hands most of my life as a technician of one sort or another. Used to play cornet, trumpet and tuba and no longer have the wind to play.

Decided to build my own dulcimer after a friend built me a couple of tear drops. Been in the wood shop at the local community center off an on for a few years.

This was easier than expected and satisfying. Tone quality is great. Paid extra for a chromatic fret board. Wish I had Richard and company put in the position dots. Called and Richard gave me ideas on putting them in. Adhesive dots for the time being from the Big A.

All parts were top quality and fit perfectly. Finished dulcimer had excellent sound. Base string is a bit heavy. Takes some getting used to. Overall, it’s my best instrument. 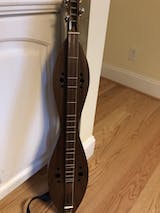